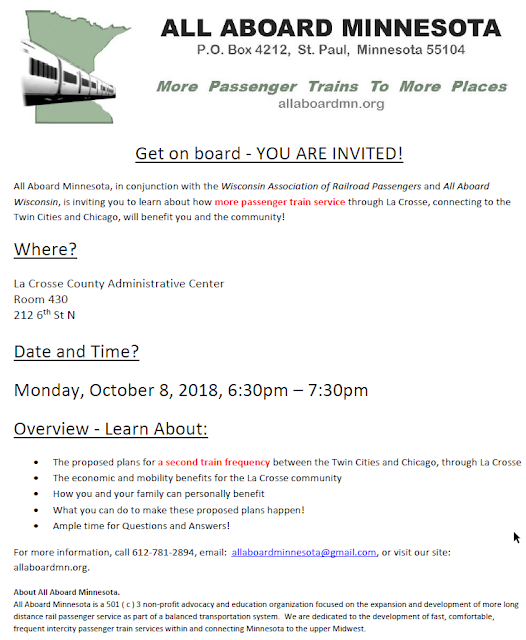 Here are the details. Registration link below.

Report from the Ride-Along

It was a sunny morning and the Transit Center was bustling. Besides the usual buses moving in and out of the Center, a new ride was waiting to take its first public run. 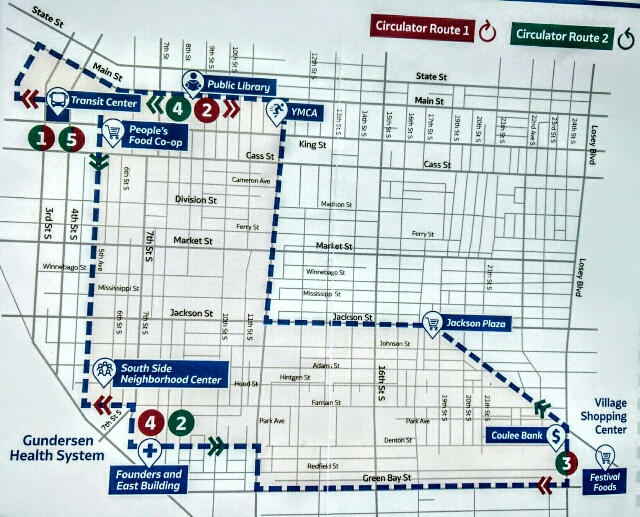 The "community circulator" (CC) will connect the downtown with some major stops around the city's south side, providing more direct service for some and closer, more convenient stops for others. One goal is to provide access to food, businesses, and heath care for residents of the Powell-Poage-Hamilton neighborhood, but the benefits extend far beyond those few blocks.

The CC "Ride-Along" left the Transit Center at 9:40 and headed to Fifth Avenue. The new route will provide convenient access to the People's Food Co-op as it heads south on Fifth Avenue. A jog east at Farnam, and another turn onto 7th take the circulator directly past the Southside Neighborhood Center. This also provides a connection point with the Route #1.

The CC stops near Gundersen Health Center's Founders and East buildings. Today, we stopped there and were greeted by several Gundersen employees. (Gundersen participates in the MTU Works program providing public transportation education and subsidized bus passes for employees.) Then we continued east along Denton to West Avenue.

Another short jog south on West Ave brought us to Green Bay where we turned east, headed for Losey and stops by Central High and the Village Shopping Center. Here, connections with the #4 and #2 buses are possible.

Heading north on Losey, we came to the State Road intersection. If the old K-Mart is developed into a shopping/housing complex (personally, I'm hoping for a Trader Joes and a hardware store in the mix), the CC riders will have even more retail options.

The circulator turns west onto State Road with a stop by JavaVino and continues to Jackson (Jackson Plaza) and on to West Ave near Viterbo, Walgreens, Powell Park, and, after a turn north on West Ave, Mayo Health System.

Our tour continued north to Main Street and a stop near the YMCA, and then west to a stop at the Main Library, Ho-Chunk Three Rivers House, and Burns Park.

We ended at the Transit Center aboit 1/2 hour later where riders provided our driver and MTU staff with a round of applause.

Riding this new route, it was hard not to dream about similar circulators on La Crosse's far south (bringing service to new developments near Southern Bluffs), north, and far north (including full service for Onalaska and better connections with new City housing near the landfill, plus Woodmans and the DMV) areas. (And then it was hard not to day dream further about a north-south bi- directional express route going from Woodland straight down to the Goodwill on Mormon Coulee Road every half hour with just a few stops along the way where riders could connect with other routes (or even just finish their commute by bicycle). 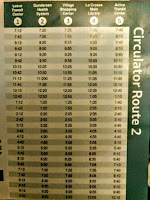 The great parts about the new CC is that it runs both ways most of the day and continues one direction with half hour service into the evening. The sad part (so far) is that it is only a Monday through Friday route right now (I think). And by the way, there are definitely stops in between the major time points so access should be good for everyone near the route. 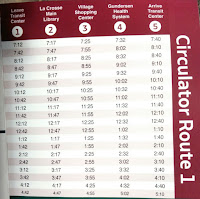 LATA hopes to work with the MTU on a public Open House this fall to provide info about the exciting changes coming and collect input and ideas. Stay tuned.

In the meantime, try out the new circulator and leave your impressions in the comments.